current affairs, economy
1 July 2017
What is a Universal Basic Income?•    A universal basic income (UBI) is an unconditional and universal right. It requires that every person should have a right to a basic income to cover their needs, just by virtue of being citizens.•    The Economic Survey (ES) 2016-17 says the time has come to think of UBI for a number of following reasons•    Social Justice - A UBI promotes many of the basic values of a society which respects all individuals as free and equal.•    Poverty Reduction - Conditional on the presence of a well-functioning fnancial system, a Universal Basic Income may simply be the fastest way of reducing poverty.
•    Agency - The poor in India have been treated as objects of government policy. An unconditional cash transfer treats them as agents, not subjects.•    By taking the individual and not the household as the unit of beneficiary, UBI can also enhance agency, especially of women within households.
•    Administrative Effciency -  It is a way of ensuring that state welfare transfers are more effcient so that the state can concentrate on other public goods.
What are its basic principles?
What are the flaws in proposed UBI?
What are the justifications provided by ES? 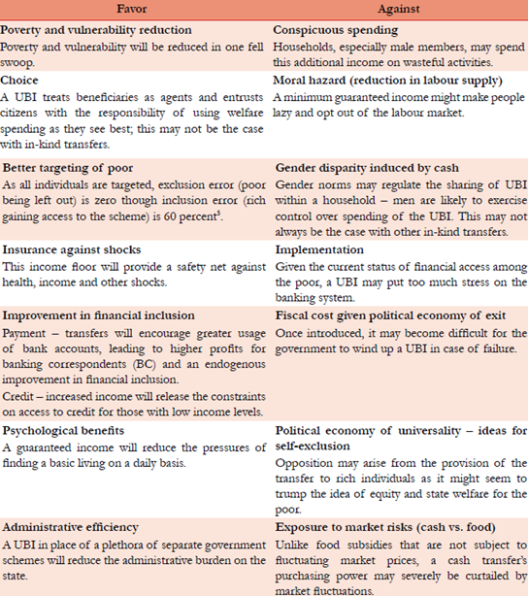 What a genuine UBI would entail?
Source: Economic Survey & The Hindu