GS-1, GS-2
3 August 2018
Starting august 15, Aarogyasri, Telangana state government's highly successful health insurance scheme, may add a prefix - Ayushman Bharat (AB) - to its name.
That will not be the only difference. The scheme provides a Rs2 lakh annual health coverage to below poverty line (BPL) families of the state and this will now be enhanced to Rs5 lakh. Instead of the 949 treatment packages that are being offered now, Ayushman Bharat - Aarogyasri will offer 1,350 treatment packages. The scope of the coverage might also see some increase as every family that finds mention in the Socio Economic Caste Census (SECC) list of the Central government will be automatically entitled to avail the benefits under AB-Aarogyasri.
The makeover is part of an integration process that will see Telangana's own health insurance scheme becoming part of a national scheme, Ayushman Bharat - National Health Protection Scheme (AB-NHPS), that is expected to be officially rolled out by Prime Minister Narendra Modi on Independence Day.
The mega health scheme, termed by some as Modicare, was announced by Finance Minister Arun Jaitley on February 1, while presenting the Union Budget 2018/19. The coverage universe of AB-NHPS is the 10 crore poor and vulnerable households (approximately 50 crore individual beneficiaries) that figure in the SECC list. In mid-June, 20 states including Telangana, signed MoUs with Ayushman Bharat Mission, the Central government entity formed to administer this scheme, to express their willingness to be part of the project. Most of them had state-level health insurance schemes like that of Telangana and all of that will now have the prefix - AB.
The Centre and state will share the cost of managing the programme in a 60:40 ratio. "We are waiting for the stabilisation of the IT system. It is not in my hands. The moment we are confident of catering to 50 crore people, we will launch it," says J.P. Nadda, Union Health Minister. Though he declined to give an exact date, efforts are on to see that systems are in place by mid-August. "We are working on the request for proposal (RFP). We are getting insurance companies on board. We have a lot of work to do in the next two months. There is lot of commitment (among stakeholders). I am quite hopeful that we can do it," says Indu Bhushan, CEO, Ayushman Bharat Mission.
NITI Aayog, the government think-tank, was instrumental in putting a shape and structure to the Ayushman Bharat Mission. "The states are more or less on board. Many of them have robust existing programmes that put them at a higher level of readiness in terms of delivery. Their experience gives us confidence as they are not starting afresh at all. They say that they can do RFP, they can enter into contracts with insurance companies, they know how to empanel hospitals, how to identify fraud?that experience is hugely useful," Dr Vinod K. Paul, Member, NITI Aayog, explains. "Their cumulative experience will help others learn. We are acting as a bridge. So there is experience, there is managerial grit to run it."
Should the confidence shown by government functionaries be taken with a pinch of salt? Well, except Uttar Pradesh, Bihar, Madhya Pradesh and Haryana, almost all states have introduced some social health insurance scheme or other that involves empanelment of private hospitals (government hospitals are automatically part of the scheme), selection of insurance companies and the due diligence. To that extent, the minister and officials are right. Further, there has been a conscious attempt to accommodate the views of the states - as was the case with the talks that led to the introduction of Goods and Services Tax (GST), the one nation, one tax concept - which reflects in the decision to retain the name of the state scheme (with an AB prefix) and allow flexibilities in the package pricing pattern. But that doesn't mean it's a perfect system.
"I am of the opinion that ideally, every incremental rupee should be spent on reviving the public sector, with a focus on the rural case load. Any demand side financing scheme in the secondary or tertiary sector means more money to the existing private hospitals in select urban centres, aggravating the rural-urban divide", says Oommen C. Kurian, Fellow, Observer Research Foundation (ORF), a Delhi-based think-tank. However, he adds that NHPS is a step forward and the Rs5 lakh coverage to 100 million poor households should ideally see a no frills high quality private sector moving closer to the currently underserved rural population. "That the government is resisting private sector pressure to increase rates means it is also supporting the existing public sector to lay claim to some part of this bonanza, and use the reimbursements (double payments in a way) to improve quality in government hospitals. This is a positive development," says Kurian. Also, the health and wellness centre's initiative (another part of Ayushman Bharat Mission), about which not many people talk about, is the more important component, according to him. "It will mean the much delayed shift from selective primary health care to comprehensive primary health care will reduce the need for people to visit secondary and tertiary hospitals." 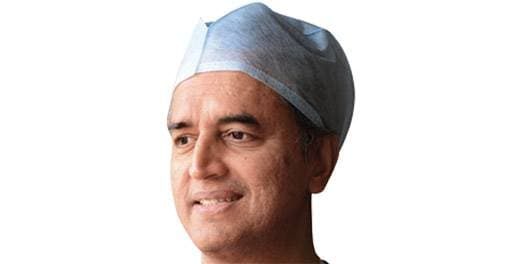 DR. DEVI PRASAD SHETTY Chairman and Chief Executive, Narayana Health
Dr Srinath Reddy, President, Public Health Foundation of India (PHFI), agrees that it is a good start. "SECC list covers 40 per cent of the population. It is a good thing, except that it still leaves out a large number of people. The top 10 per cent of the pyramid have private insurance and will be covered by CGHS, or other schemes. They are protected. But between this bottom 40 per cent and top 10 percent, there is still a 50 per cent that is vulnerable. You should find ways and means so that they can also be protected even if that means a smaller amount of co-payment," he points out. "You have to strengthen other elements of primary health care, including PHCs, because if that doesn't happen, many people will spill over to secondary and tertiary health care, the demand on NHPS will rise, and that will become a very costly affair," he says.
Ashwani Mahajan, National Co-convener, Swadeshi Jagaran Manch (SJM), points out that the scheme is very good as it will not only lead to the welfare and treatment of people but also save them from indebtedness and getting poorer. "I appreciate the scheme, but caution against it falling into the hands of foreigners (foreign insurance companies)."
The reasons for hope of some are causing worry to some others, especially private insurance companies and corporate hospitals. While insurance companies are concerned about the low rate of premium at which they may have to function, hospitals are finding the package rates for various treatments, as mentioned in the RFP, too low. "All of us have agreed and we want to do the scheme, but the rates should be based on a scientific study," said Dr. Devi Prasad Shetty, Chairman and Chief Executive, Narayana Health. "We are willing to work with the government and want to cooperate but only hope the government will give us some incentives," says Suneeta Reddy, Managing Director, Apollo Hospitals.
Dr B. S. Ajaikumar, Chairman and CEO at HealthCare Global, a chain of hospitals focused on healthcare, says that what the government is offering is below their own rate. The rates should be based on the costing for hospitals - taking into account cost of real estate, HR, maintenance and technology. Dr. Ajaikumar feels that when compared to a tertiary hospital in a Tier I city, the rates would be higher than the CGHS rates and, while it would vary based on the various parameters, it could be 20 to 25 per cent more.
NITI Aayog's Dr Paul assures that the fear among the industry is baseless. "Private hospital chains can get up to 40 per cent higher rates for a procedure over the NHPS/CGHS prescribed rate provided they meet conditions. They get 10 per cent extra if the hospital is NABH-accredited, another 10 per cent if it offers postgraduate education, 10 per cent more if it is located in one of the 115 backward (aspirational) districts. Over and above all of this, the state governments have the flexibility to offer a 10 per cent additional top-up," he says. Crisil Research says that the scheme opens up huge opportunity for health insurance firms, at a viable premium rate. The challenge will be to ensure low premium as several state governments are opting for trust based models, making risk calculation difficult, it states. Substantial increase in health insurance penetration, however, is a given. "We feel the total opportunity shall be about Rs12,000-15,000 crore. However, it is yet to be seen how much of this is serviced by the Insurance industry as the states have the option to choose between any of the three models - Insurance, Assurance (Trust based) or a hybrid of the two," says Ashish Mehrotra, MD & CEO, Max Bupa Health Insurance. J.P. NADDA Union Health Minister
Dr Paul pointed out that the RFP offers priority to public insurance companies, though, everyone is allowed to bid for participating in the scheme. Ayushman Bharat Mission's Indu Bhushan adds that the government has no plans to set any minimum insurance premium level and the companies will have to discover it through competitive bidding. The government is now set to handhold the greenfield states (where there is no existing health insurance scheme) to set up the IT infrastructure and capacity to manage such a scheme.
Ayushman Bharat Mission is literally, in mission mode. For Prime Minister Narendra Modi it can prove to be the main electoral plank in 2019.