Home → g → The Unemployment Paradox: Looking at Growth Without Jobs

The Unemployment Paradox: Looking at Growth Without Jobs

g
11 January 2019
In a recent interview, Prime Minister Narendra Modi suggested that Indian youth selling pakoras and earning Rs 200 a day constituted job creation. But, economist Santosh Mehrotra’s research, based on data published in the Economic Survey 2017-18, has found discrepancies between the Bharatiya Janata Party’s (BJP) claims and what the data projects with regard to job creation. In this reading list, we will explore the discrepancies in the narratives of job creation.
1) How is India’s Economy Growing without Jobs?
The most puzzling aspect about employment policies in India in recent times is that the years of high economic growth have been years of joblessness too. Despite growing at more than 7% for the last decade and a half, the economy could not generate enough employment. Growth rate on annual employment fell drastically from 2.87% to less than one percent over this period.
Alok Sheel has pointed out that though the Economic Survey 2017-18 has suggested that the Indian economy is on the path of recovery, there is growing apprehension that the discrepancies in data extend beyond employment estimates only. The growth figures, too, are not outside the suspicion of statistical jugglery and deflection. Shifting time series, and the selective use of data can lead to some political advantages. But it deflects attention from the bigger question, that is, the “revival” of the economic growth.

The economy is now growing basically on the strength of consumption, accounting for 95% of GDP growth in 2016–17, and public investment. Fiscal expansion during a downturn is justified on Keynesian grounds, but unless private investment turns around quickly to facilitate exit, the fiscal balance can spin out of control. The stresses are already palpable in slippages from fiscal deficit targets. The government was fortunate that fiscal space was created by the decline in oil prices, which were by and large not passed on to the consumer. This space is now shrinking with oil prices firming up. 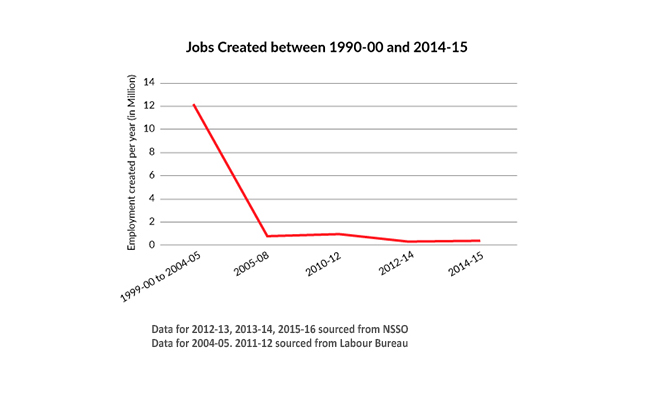 2) Is Jobless Growth Informalising Labour?
A worrying trend of the Indian job market is that informalisation is gradually taking over the formal job markets as well. The share of informal jobs in public sector increased from 30% to 35% within a span of five years between 1999-00 and 2004-05; while in the formal private sector this has decreased from 69% to 63%.
Vinoj Abraham’s 2017 article has surveyed in detail the sectors that were affected by the stagnation in the job market. In general, major labour-absorbing sectors like construction, real estate, finance, and business services sector have experienced a slowdown in the growth of gross value added (GVA) and subsequently employment creation. The IT/BPO sector, which is within business services was a major contributor of organised sector employment in 2012 comprising nearly 70% of the jobs created. When employment in the IT/BPO dropped by 84% in between 2012-14, it was a huge blow to organised sector employment.

Employment growth in India slowed down drastically during the period 2012 to 2016, after a marginal improvement between March 2010 and March 2012, according to the latest available employment data collected by the Labour Bureau. There was an absolute decline in employment during the period 2013–14 to 2015–16, perhaps happening for the first time in independent India. The construction, manufacturing and information technology/business process outsourcing sectors fared the worst over this period. 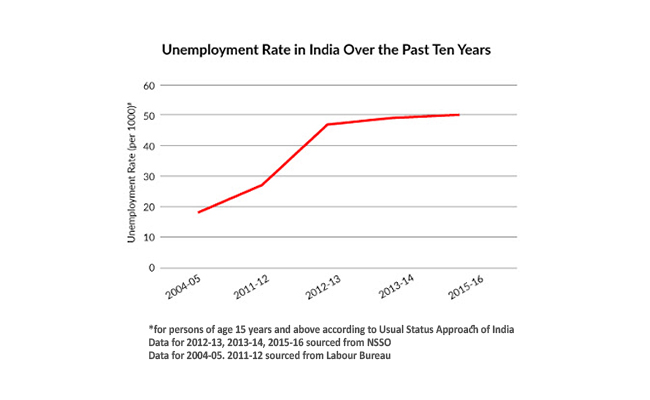 3) What Have Policies Done to Address Informalisation?
From the perspective of a neo-liberal state, the increasing informalisation of the labour force fits the bill of fiscal austerity well. But, as Supriya Roy Chowdhury’s article shows, it also pushes work and work-related rights of the citizens to the margins of state responsibility.
It has been argued that GST has played a favourable role in “formalising” the informal sector, though it is yet to be empirically verified. On the other hand, the government has come up with a draft Labour Code on Social Security, 2018 that endeavours to universalise the social security provisions for the entire working-class population, including wage earners and self- employed. However, the success of the code will largely depend on successful fiscal federalism between the central and the state governments.

The draft labour code focuses on providing social security to all labourers. However, the framework on coverage and registration of workers is not contextualised, that is, based on socio-economic conditions in different states, but is uniform across all the states. This may not fulfil the criteria of “universal coverage,” especially for poor states like Bihar and Uttar Pradesh, where coverage of existing social security schemes for workers itself is very narrow. As per Census 2011, around 71% of the total households in rural Bihar earn their livelihood as manual casual labourers, as against the national average of 51%. Hence, registration of manual casual labourers under the social security schemes will be a huge challenge for resource-constrained states.

4) Is it a Systemic Problem?
What remains paramount in India’s employment discourse is the necessity of creating jobs that can absorb the additional labour force. Employment propelled by distress factors such as agrarian crisis and the deceleration in real wage growth will not be able to contain the aspiration of the Indian youth, particularly the educated, for long. Satyaki Roy’s 2016 article argues that the manufacturing sector, which recorded declining employment elasticity in the organised sector, will not be able to mend the gap between growth and employment. He suggests that manufacturing has to be rejuvenated and contextualised in a larger strategy of full employment with interventions related to demand structures, technology, size structure of firms, as well as a calibrated engagement with the global market.

The relevance of the question of employment in the Indian context finally boils down to utilising the only abundant factor, that is, unskilled labour. Given the global nature of competition where producers have to compete with goods produced using technology that suit the factor endowments of developed countries, the issue of technical efficiency gets mingled with the tastes and preferences that developed countries usher in the market. It hardly leaves a choice for the producers in developing countries to employ labour using technologies. The choice of adopting labour using technology, therefore, has to be closely related to changes in the product mix. If the demand is shifted more towards labour-intensive goods, it will become easier to employ the unused labour force.