Q. In 2019, India has ratified Multilateral Convention of _ _ _ _ to Implement Tax Treaty Related Measures to prevent Base Erosion and Profit Shifting.
HINT: FATF is for Money laundering and terror Finance , FSDC is an Indian body headed by the Finance Minister and UN doesn’t care so much for tax avoidance.
Q. Find out the correct statement(s) about the European Central Bank:
Answer Codes
HINT: Lagarde resigned from IMF because she’s 100% certain of getting this job and living a comfortable life in Frankfurt. Where is Frankfurt located, socho?
Q. Find out the correct statement(s) about the World Bank:
Answer Codes
HINT: SBI Managing Director Anshula Kant
Q. Find out the correct statement(s) regarding “One Nation, One Ration Card” scheme:
Answer Codes
HINT: Ministry of Consumer Affairs Food and Public Distribution will integrate all ration cards to one server and any beneficiary, anywhere in the country, will be able to pick up their grain from any public distribution system of their choice after 30th June, 2020.
Q. Find correct the statement(s) about National Anti-Profiteering Authority:
Answer Codes
HINT: Setup under the Central Goods and Services Tax Act, 2017. GST council extended its tenure by 2 more years, deals with GST and not DIRECT Tax.
Q. find out incorrect statement(s) regarding National Electricity Distribution Company:
Answer Codes
HINT:   NTPC and Power Grid Corporation of India have formed it, and if this is formed in 2019- then how can it directly become a Maharatna company which requires x crores of profit over y years!! And if its name is ‘national’, then how can it be doing work only in UT with Legislature!? 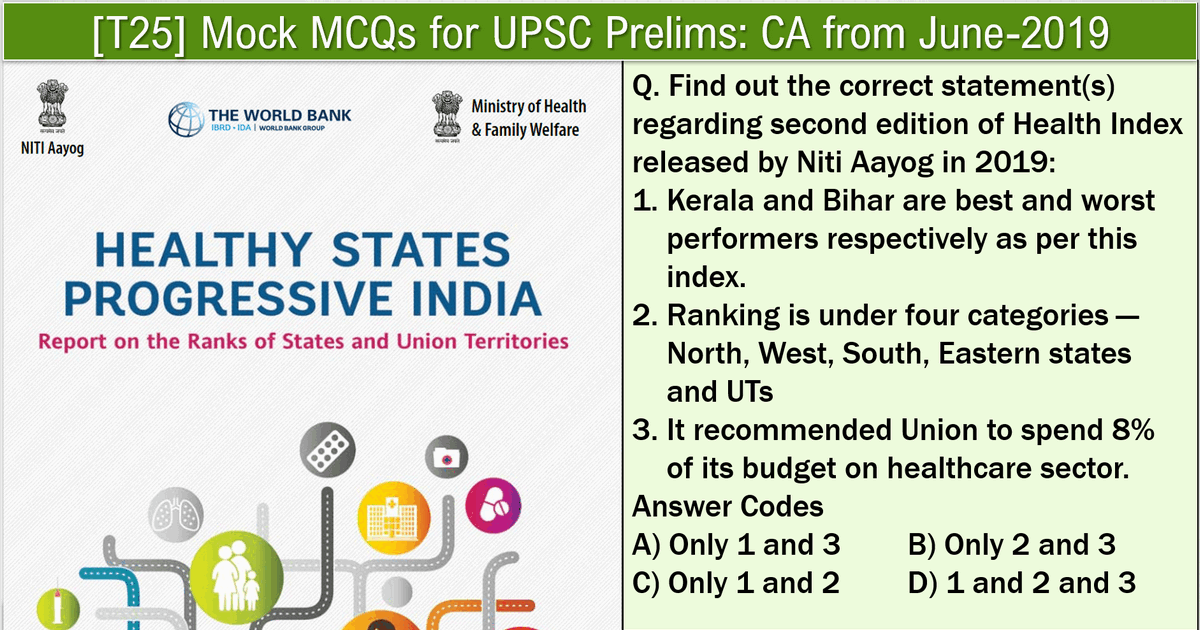 Q. Find out the correct statement(s) regarding second edition of Health Index released by Niti Aayog in 2019:
Answer Codes
HINT: Kerala best, UP worst. Ranking was done under three categories — larger states, smaller states and Union territories (UTs)  to ensure comparison among similar entities. Union government should spend 2.5 percent of gross domestic product on health
Q. In 2019, RBI has waived the charges on following to encourage less-cash economy
Answer Codes:
HINT: NPCi runs IMPS, then how can RBI on its own volition say it’ll be free!?
Q. In 2019-May RBI’s Nandan Nilekani Panel submitted report on Less cash economy. It has proposed:
HINT: will stopping MDR subsidy help less cash economy? Will allowing cryptocurrency reduce the challenging of money laundering?
Q. Find correct statement(s) about the LIBRA cryptocurrency:
HINT: If same developer makes new cryptocurrency- people will lose faith in original one. Bond-i uses Ethereum’s blockchain
Q. As of 2019-June, ‘On-tap’ Licensing system is applicable in India for:
Which of the statements given above is/are correct
HINT: RRB are setup under RRB Act. So, how does on-tap system come into picture? Further, in 2019-June Shakti announced to give ‘On-Tap’ license in Small Finance Bank category.
Q. Find correct statement(s) about the National Housing Bank
Which of the statements given above is/are correct
HINT: I’ve explained it in this Video.
Q. Which of the following has/have been provided under Nirmala S’s General Budget 2019?
HINT:
Q. Find wrong statement(s) about the Standup India scheme
Answer Codes
HINT: only SCB branch, beneficiary only SC/ST/Women, defaults covered by DFS’s NCTCGC.