The father-daughter duo, posted in different districts, met on duty when they came to attend the Andhra Pradesh State Police Duty Meet in Tirupati. 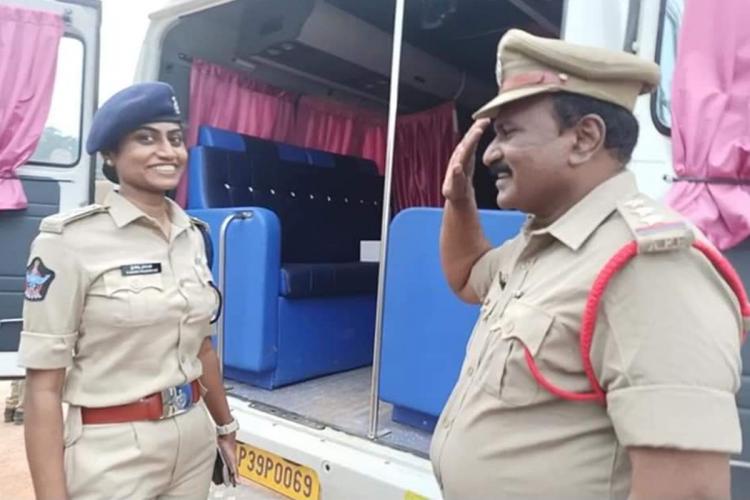 What transpired on Sunday in Andhra Pradesh’s Tirupati brought tears to the eyes of not only a father-daughter duo working in the state police force, but also to all those who witnessed the heart-warming incident.

It was a proud moment for Circle Inspector Y Shyam Sundar when he saluted his daughter, Yendluru Jessy Prasanthi, who is presently posted as the Deputy Superintendent of Police (DSP) of Guntur district. Both are in Tirupati to attend the Andhra Pradesh State Police Duty Meet titled ‘Ignite’, being held there from January 4 to 7.

“My father is my major inspiration. I’ve grown up seeing him serving the people relentlessly. He has helped many people in whatever way he could. That’s what made me choose this department. I have a very positive outlook towards the department,” the DSP shared.

A similar situation was witnessed in 2018 in the neighbouring Telugu state when former Deputy Commissioner of Police AR Uma Maheshwara Sarma saluted his daughter Sindhu Sarma, who was posted as the Superintendent of Police in Telangana’s Jagtial district. Sindhu is a 2014 batch Indian Police Service officer. The daughter and father had come face-to-face while on duty for a public meeting organised by the TRS in the outskirts of Hyderabad. A photo of the touching moment of the father saluting the daughter had gone viral back then.